Today, the Midwest is home to major sectors of the U.S. economy – manufacturing, agriculture, energy and tourism. Midwestern governors are always seeking production opportunities to increase economic growth and create jobs in their individual states and the region.

America continues to be the largest manufacturer in the world, with the Midwest contributing significantly toward the country’s output. New energy industries in the Midwest are emerging as focal points for job creation and retention. A number of recent studies suggest that new energy industries can create as many as 1.2 million jobs over the next decade, with as much as a third of those in high-wage, high-skill manufacturing and construction jobs. 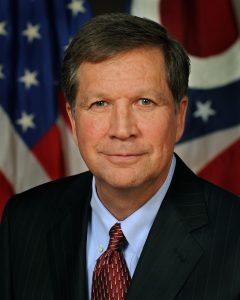 Technology’s profound and transformative impact on our society and workforce will not cease. In fact, its impact is increasing at such a rapid pace today that we can expect it to soon reach critical mass in the form of a disruption that will soon create jobs currently unimaginable. Ultimately, this disruption will lead to increased productivity and prosperity, but adjusting to it will require our region to retain and recruit the brightest minds and hardest workers, as well as leverage existing strengths in new ways.

To be prepared, Midwestern states must be on the forefront of anticipating change. The chair’s agenda will explore this challenge by looking at how education and training intersects with our region’s strengths in infrastructure, advanced technology, automation and energy, to allow the Midwest to be a premier location for success far into the future.

A shortage of truck drivers is a rapidly growing problem in MGA states. Nearly 70 percent of freight moved in the U.S. goes by truck, particularly in the manufacturing heavy Midwest. The trucker shortage is estimated to be at least 48,000 drivers nationwide, and will grow to about 175,000 drivers by 2024. In 2016 the MGA will focus on the truck driver shortage in the Midwest as part of the America’s Smartland Discussion Series.

The MGA will bring together state government staff, relevant associations, and impacted businesses for a series of conference calls on varying related topics. Then the MGA will host a day-long meeting to discuss this issue, as well as industry needs, share best practices, gain a better understanding of the issue, and review potential solutions and unifying issues to increase the interest in and number of truck drivers in the Midwest.

Kansas Governor Brownback was the 2016 Chair of the MGA and his agenda focused on promoting the benefits of mentoring as a method to reduce poverty in the Midwest.Despite the globally recognized regional attributes of the Midwest, there are some in the region that are living in poverty. States continue to lead on policies, programs and assistance for those in need. However, the complexity of this issue does not allow for a one-size-fits-all solution. Fortunately, there are a lot of regional similarities and opportunities for sharing best practices.

As part of this effort, the MGA establishes a working group of Midwesterners from a wide-spectrum including governors’ and state agency staff, academia, community groups and other leaders in their states.

Exploring Poverty Reduction Strategies and Advancement Opportunities in the Midwest

The Midwestern Governors Association (MGA) will be holding a regional poverty summit in Kansas City. The summit, Exploring Poverty Reduction Strategies and Advancement Opportunities in the Midwest, will bring together an array of stakeholders from governors’ offices, state agencies, non-profits and other sectors who are leading efforts to reduce poverty and expand opportunities in the Midwest.

With the economic downturn and historic losses in manufacturing jobs, embracing the new energy economy can better position the Midwest for today’s economy while leveraging our significant agricultural and manufacturing resources.

Over the past several years, governors have positioned the region as a global leader in the energy economy through their focus on ambitious regional energy goals and workforce development strategies. Ensuring sufficient investment opportunities will promote business, drive innovation and establish the Midwest as a global leader and job creator.

Job creation and a sustained economic growth are top priorities for the region’s governors. In order to address the challenges and harness the opportunities faced by a transforming regional economy, the Midwest must bring in new capital to the region, form new global partnerships and tap the potential of our under-employed workforce. Midwestern governors are committed to encouraging innovation and entrepreneurship that capitalize on the independent spirit of Midwesterners. Through cooperative regional efforts, Midwestern states can continue to grow their economies and create jobs.

A sound transportation system is the foundation of our nation’s economy and our freedom. It is a fundamental requirement to help fulfill the potential of the Midwest’s energy, people and products. The many transportation alternatives available to our region – highways, rail, transit, water and more – provide the Midwest with many opportunities and competitive advantages.

The success and growth of these industries and the economic vitality of the region hinge on access to safe, convenient, reliable and affordable transportation. A sound transportation system is the foundation of our nation’s economy and our freedom. It is a fundamental requirement to help fulfill the potential of the Midwest’s energy, people and products. The many transportation alternatives available to our region – highways, rail, transit, water and more – provide the Midwest with many opportunities and competitive advantages.

In 2008 and 2009, the MGA developed regional recommendations for the re-authorization of the federal transportation bill, which was recently signed into law in July 2012. The MGA also works to meet rural and urban transportation needs through full funding for transportation projects and implementing high-speed rail in the region. 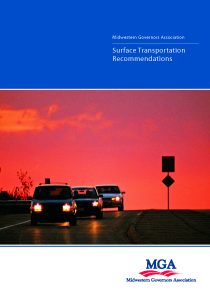 Midwestern states and their rural communities continue to be excellent places to live, work and raise a family with quality education systems, low crime rates, small close-knit communities and numerous outdoor recreational activities. Even with this high quality of life, rural communities are challenged with building and maintaining economic activity that supports their standard of living, as well as well-paying jobs that are needed to promote family success. They lack the resources and economies of scale to address pressing issues such as access to quality health care, higher education and economic development.

The Midwest depends on world markets. The Midwest region exported $291.7 billion worth of merchandise in 2012. Increasing exports of Midwestern agriculture and manufactured goods is a key to continuing to grow the Midwest’s economy. Foreign investment creates jobs in the Midwest. In 2010, foreign companies employed nearly 1.1 million workers in the MGA region.

China is the region’s third largest market, with $18 billion of merchandise being exported.

The United States and China both have distinct regions. China also has entities that promote collaboration among governments at the sub-national level similar to the functions of U.S. regional governors’ associations. The Midwest and China’s central provinces have similar agriculture, manufacturing, minerals and food production industries.

The Midwestern Governors Association (MGA) is initiating efforts to strengthen ties between the Midwest and China, in particular its central provinces. To do this, the MGA is working with the Midwest U.S.-China Association. The MGA hopes to link Midwestern companies, organizations and associations with their counterparts in the central region of China and improve the economy of MGA states.