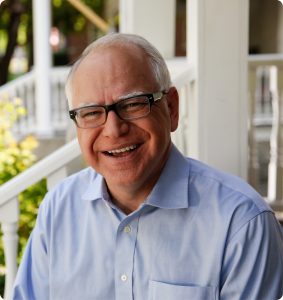 Public service defines Tim Walz. Tim is the highest-ranking enlisted service member ever to serve in Congress, an award-winning high-school teacher, a champion football coach, and a leader in Congress. On November 6, 2018, Tim was elected the 41st Governor of Minnesota.

Tim’s parents, Jim and Darlene, instilled in him the values that continue to guide his commitment to the common good and selfless service. Summers of farming with his family reinforced these lessons.

Tim’s dedication to public service began soon after his graduation from Butte (Nebraska) High School with his 24 classmates. At the age of 17, Tim enlisted in the Army National Guard. In 1989, he was named Nebraska Citizen-Soldier of the Year.

“I loved growing up in a small town in rural Nebraska. Small-town life and working on family farms each summer taught me fundamental lessons about the importance of family and the value
of hard work. I had wonderful public school teachers, great neighbors, and loving parents.”

“When I enlisted in the National Guard at the age of 17, I never imagined that I would serve for 24 years. I knew that I was ready to accept the responsibility that comes with serving our country. Over the years, I discovered that I had the capacity to lead–a duty that I strive to fulfill each and every day. The honor of serving alongside my neighbors in southern Minnesota was a privilege.”

An Award-Winning Teacher After high school, Tim held a series of odd jobs ranging from building grain silos to manufacturing to mortgage loan processing as he explored America. He accepted a temporary teaching position at the Native American Reservation in Pine Ridge, South Dakota. It was this experience that convinced Tim to follow his father’s lead and become a teacher.

“I tell folks that managing a high-school lunchroom for years trained me for the craziness that can overtake Washington, D.C. My father was a teacher–I learned early on that the opportunity to help students learn and achieve their goals is incredibly rewarding. From the classroom to the lunchroom to the football field, I loved every day that I worked with students.”

Tim attended Chadron State College, where he graduated with a social science degree in 1989. Harvard University offered Tim an opportunity to gain a new perspective on global education by teaching in the People’s Republic of China in 1989-90, where he joined of one of the first government-approved groups of American teachers to work in Chinese high schools.

Following his return to Nebraska in 1990, Tim seized the opportunity to develop a program of cooperation between American and Chinese students. He created a small business–Educational Travel Adventures, Inc.– through which he led annual educational trips to China for American high school students. Over the years, Tim has served as a visiting Fellow of International Relations at the Macau Polytechnic University, a position that helped develop his knowledge of China.

Tim’s return to Nebraska led to pivotal moments in his life. He accepted a teaching and coaching position. More importantly, he met Gwen Whipple, who was teaching at the same school. “It’s true: the best thing that happened to me was meeting and marrying Gwen. Without a doubt, I outkicked my coverage (to use a football term)!”

In 1993, Tim was named the Outstanding Young Nebraskan by the Nebraska Junior Chamber of Commerce for his service in the education, military, and small-business communities. Tim and Gwen Walz moved to Mankato in 1996, where they began teaching and coaching at Mankato West High School. In addition to teaching social studies, Tim helped coach the Mankato West football team that won the school’s first state championship.

“As an Ivanhoe native and a Gustavus Adolphus graduate, Gwen loved living in southern Minnesota. We jumped at the chance to move to Mankato and start our lives together. Every day, I know that I represent the best district in the U.S. Congress. I grew up in Nebraska, but Minnesota is my home.”

Tim’s inspiring approach to teaching gained him recognition as the 2002 Minnesota Ethics in Education award winner, 2003 Mankato Teacher of the Year, and the 2003 Minnesota Teacher of Excellence. Determined to expand his own education, Tim completed his master’s degree in educational leadership in 2001 and began doctorate studies at St. Mary’s University in Winona.

“To be honest, I did not pay a lot of attention to politics. Things changed in 2004. Former President George Bush came to speak in a Mankato quarry. I accompanied two students who wanted to hear the speech. When we arrived, one of my students was turned away because of a John Kerry sticker on his wallet.

We were ordered to board a bus to take us away from the quarry. Though I was allowed to stay–after offensive questioning by a campaigner–the boys were told to leave. This was a teachable moment for them and for me. I decided that, if a command sergeant major could be harassed for wishing to hear his commander-in-chief, the political process was deeply broken.

That night, I became committed to working to help repair our nation’s political system.”

“November 7, 2006, was an amazing night! Team Walz worked tirelessly throughout the district for the entire campaign. Then and now, we never take anything or any constituent’s support for granted.”

Bringing an authentic voice of the people to Washington and by combining a Midwestern work ethic with political pragmatism, Tim has brought solid and sensible leadership to Minnesota’s 1st Congressional District, which includes the communities of Worthington, Mankato, Albert Lea, Faribault, Austin, Rochester and Winona.

Tim’s legislative accomplishments are remarkable. In addition to his work on the Farm Bill, the Lewis & Clark Regional Water System, Minnesota Highway 14, and the Minnesota State Veterans Cemetery in Preston (MN), Tim introduced the STOCK Act, a bill that sought to limit congressional insider trading. On March 22, 2012, the STOCK Act passed with overwhelming bipartisan support in both the House and the Senate.